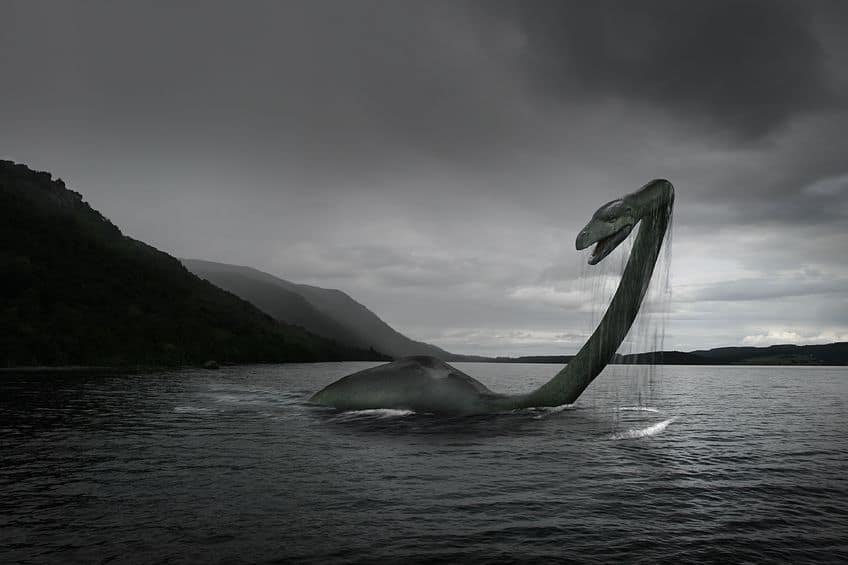 Scotland has a rich Celtic History going back over 2,000 years to a time when superstition was prevalent and unusual events were explained through gruesome tales.Scotland therefore has an extensive heritage of myths and legends ranging from ‘Greyfriars Bobby’ to the true origins of the infamous deep fried mars bar. These superstitions are still debated today as the mystery behind the myths still goes unresolved. Here at Lang Atholl we have picked a few of our favourites. What do you think, fact or fiction?
1. Loch Ness Monster

We have to start with our old favourite, the Loch Ness Monster (or ‘Nessie’ as it has affectionately come to be known). The large dinosaur-like creature was first spotted over 1,500 years ago when it was said to have jumped out of the Loch Ness, situated in the Scottish Highlands, and swallowed a local farmer.

In 1934, a photograph was taken that seemed to show a creature with a long neck emerging from the depth of the loch. Dozens of reports have since claimed to have caught glimpses of the creature but many have turned out to just be hoaxes. However in 2009 a claim emerged, seemingly to have spotted ‘Nessie’ on Google Earth’s satellite photos of Loch Ness.

Despite the mystery of whether the Loch Ness Monster is real or not still being unsolved, the myth has made Loch Ness one of Scotland’s top tourist attractions and draws thousands of tourists to the shores in hope of snapping a picture of the legendary monster.

2. The Legend of Sawney Bean

One of the most gruesome Scottish legends which have featured in numerous horror movies is the story of Sawney Bean. The question still remains whether Alexander ‘Sawney’ Bean was just a character in Scottish folklore dating back to the 18thcentury or if in fact he was once a real person.

According to the legend, Sawney Bean was the head of a criminal, cannibalistic family during the reign of King James I of Scotland. His gang made up of his wife and 46 children and grandchildren, killed and fed on over a thousand people, casting the left over limbs into the sea causing body parts to be washed up on local shores. The myth concludes that the family were eventually tracked down in a cave full of ruined body parts and were sentenced to execution.

Whether this tale is true or not, the Sawney Bean legend has become part of the Scottish Tourism and Heritage trial and the cave identified with the tale has been reconstructed in the Edinburgh Dungeon.

3. The Blue Men of Minch

Scottish heritage is not short in myths and tales of creatures lurking in Scottish waters. The strait between the Island of Lewis and the Shiant Isles was known in the 19th century as ‘the stream of the Blue Men’ because it was said to be inhabited by a strange group, The Blue Men of the Minch.

Also known as Storm Kelpies, the group are said to occasionally prey on sailors making the crossing. The tale tells that while the Blue Men with distinctive green beards slept the weather would remain calm, but they could conjure storms whenever they wished resulting in the death of many captains. Keeping a quite tongue may be something to consider if ever visiting the area, as the myth tells this is the way to pass safely.

So in future if you are making a trip across the water from Island of Lewis and the Shiant Isles, keep an eye out for the Blue Men, and if you are caught in a storm then you might want to blame them.

Originating in the Shetland Islands, the myth of The Wulver spread throughout Scotland to tell the tale of a man covered in brown hair with a wolf’s head. The ancient Celts believed that the Wulver actually evolved from wolves and was a symbol of the in-between stage of man and wolf.
Stories told that the Wulver would take pity on the needy by leaving fish on the windowsills of poorer families in Scotland. Unlike other stories of werewolves, the Scottish Wulver was considered kind and often helped lost travellers, by guiding them to the nearby towns.

The Wulver was said to be have been spotted on a regular basis around Shetland up to the start of the 20th century, out fishing for meals. The last reported sighting of the mysterious creature was in the early twentieth century as the Wulver was said to live alone in a cave on Shetland and enjoyed the peaceful life.

Numerous theories to try and explain the Wulver have been documented. Some accounts say the Wulver is an immortal spirit and modern day theories say that a Wulver could have been suffering from Hypertrichosis, a condition in which the entire body is covered in hair.

Whilst many superstitions remain, if you do happen to spot a Wulver do not fear, it might even help you on your travels.

Our final favourite Scottish myth is that of the Redcaps. Stories tell of the Redcaps to be thoroughly evil dwarf-like old men with long gray hair, red eyes and claws instead of hands. They are said to live at the Scottish Borders in ancient ruins of castles, those of which have were involved in war and murder, and kill any trespassers in their homes.

Redcaps are said to move at lightening speed and it is from the blood of their victims, their stained red hats owe them this title. They are known overcome even the strongest man, however if you were to ever cross a Redcap on your travels, quoting a few words from the Bible will save you your life.

With the Redcaps said to be one of the most dangerous mythical legends, this is not one you would want to bump into!

The question of superstition is one which will no doubt continue in the legacy of these great Scottish myths and legends. Perhaps the only way to find out if these favourites are true is to find out for yourself.

Be sure to keep an eye out!