You will arrive in Edinburgh via train in to Edinburgh Waverley Station. You will then walk to The Balmoral Hotel (attached to the station) where a member of our team will greet you at the hotel to welcome you to Scotland.

In the afternoon your tour guide will meet you at your hotel for a walking tour of the city of Edinburgh. You will see sights such as the Scott Monument, Holyrood Palace, The Scottish Parliament, The Royal Mile, St Giles Cathedral and Edinburgh Castle.

Your Guide, Alison, will meet you at the reception of The Balmoral at 09:00am.

You will then return to the majestic Balmoral Hotel. For over a century, The Balmoral hotel has found a home at Edinburgh’s most prestigious address, No. 1 Princes Street. A landmark in the centre of the city, the historic building’s grand clock still dominates the skyline, while its enviable location, stunning views, warm hospitality and world-class facilities provide the perfect retreat. Enjoy dinner in our Michelin-starred Number One restaurant, unwind in our award-winning spa and enjoy views of Edinburgh Castle. 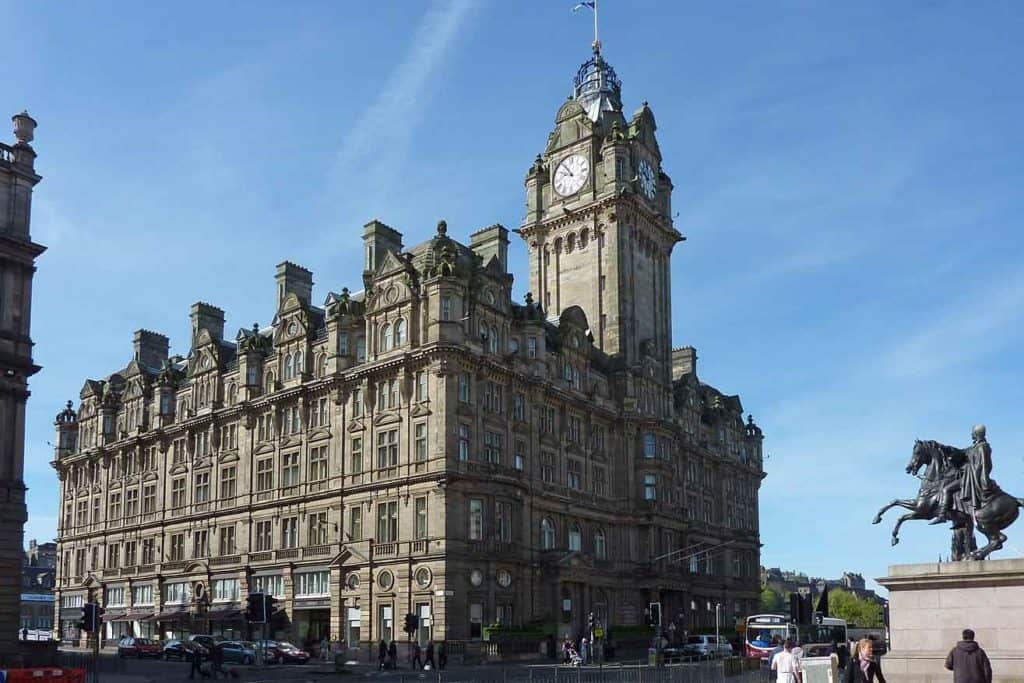 On day two a member of our team will have left the keys of your Range Rover Discovery at the reception desk of the Balmoral.
You will travel to the county of Ayrshire. On route to Ayrshire you will travel via Stirling where you will find Stirling Castle and the Wallace Monument.

Stirling Castle
one of the largest and most important castles in Scotland, both historically and architecturally. The castle sits atop Castle Hill, an intrusive crag, which forms part of the Stirling Sill geological formation. It is surrounded on three sides by steep cliffs, giving it a strong defensive position. Its strategic location, guarding what was, until the 1890s, the farthest downstream crossing of the River Forth, has made it an important fortification in the region from the earliest times.

Most of the principal buildings of the castle date from the fifteenth and sixteenth centuries. A few structures of the fourteenth century remain, while the outer defences fronting the town date from the early eighteenth century.
Before the union with England, Stirling Castle was also one of the most used of the many Scottish royal residences, very much a palace as well as a fortress. Several Scottish Kings and Queens have been crowned at Stirling, including Mary, Queen of Scots, in 1542, and others were born or died there.

Wallace Monument
The National Wallace Monument (generally known as the Wallace Monument) is a tower standing on the shoulder of the Abbey Craig, a hilltop overlooking Stirling in Scotland. It commemorates Sir William Wallace, a 13th-century Scottish hero.

You will spend the evening at the beautiful Glenapp Castle Hotel. A luxury, award-winning five star hotel providing an intimate level of service with genuine attention to detail. It has great beauty in its period furnishings and interiors as well as through the breath-taking gardens, forest, and the seascapes that surround that castle. 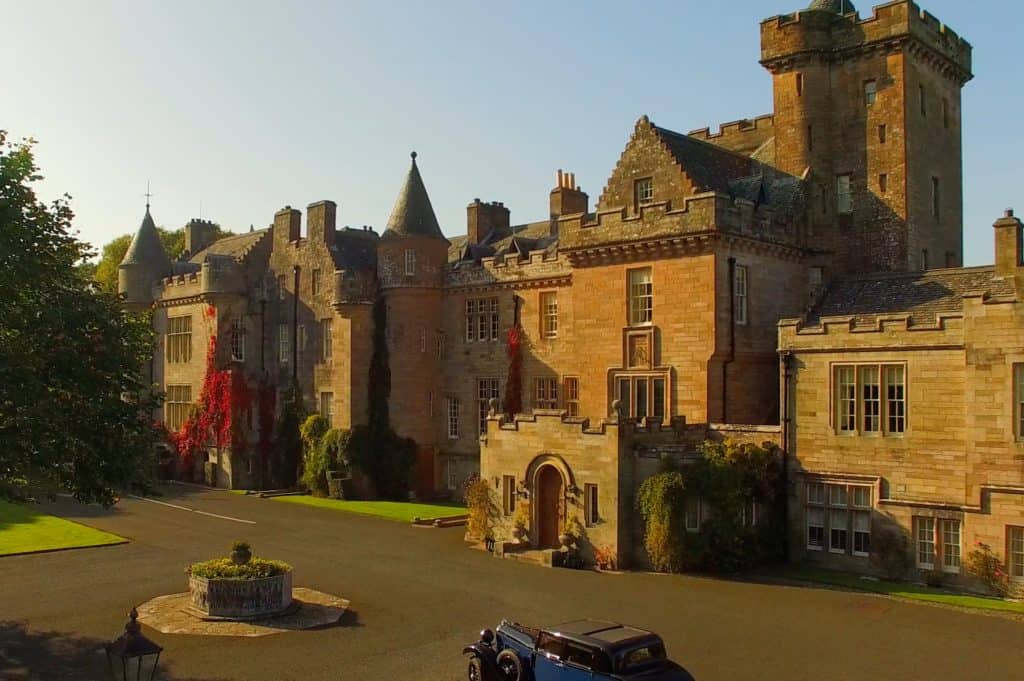 You will awake to make the short distance from South Ayrshire into Dumfrieshire which is synonymous with the MacLellan Clan. Ever since Duncan MacLellan who was the first MacLellan found in records in an charter of Alexander II of Scotland. The region of Dumfrieshire is the region believed to show the beginning of the MacLellan Clan with MacLellan Castle in Kircudbright and the town of Balmaclellan named for the clan itself are worth visiting. As is Threave Castle near Castle Douglas which was held by the Douglas Clan who were bitter rivals of Clan MacLellan and was the site of the murder of one of the clan chiefs. You will have the chance to also sit down with a local historian in the area to ask any questions after your visits to significant locations.

Whilst in the scenic seaside town of Kirkcudbright, we have arranged for you to meet a knowledgable local historian.

Threave Castle
Built in the 1370s by Archibald the Grim, it was a stronghold of the “Black Douglases”, Earls of Douglas and Lords of Galloway, until their fall in 1455. For part of this time, the castle and the lordship of Galloway were controlled by Princess Margaret, daughter of King Robert III and widow of the 4th Earl. In 1449 Threave was regained by the 8th earl, Scotland’s most powerful magnate, who controlled extensive lands and numerous castles. He fortified Threave with an “artillery house”, a sophisticated defence for its time. The excessive power of the Black Douglas lords led to their overthrow by King James II in 1455, after which Threave was besieged and captured by the King’s men.

You will return to Glenapp Castle to digest your day’s learnings over a fantastic meal within Glenapp’s award winning restaurant. 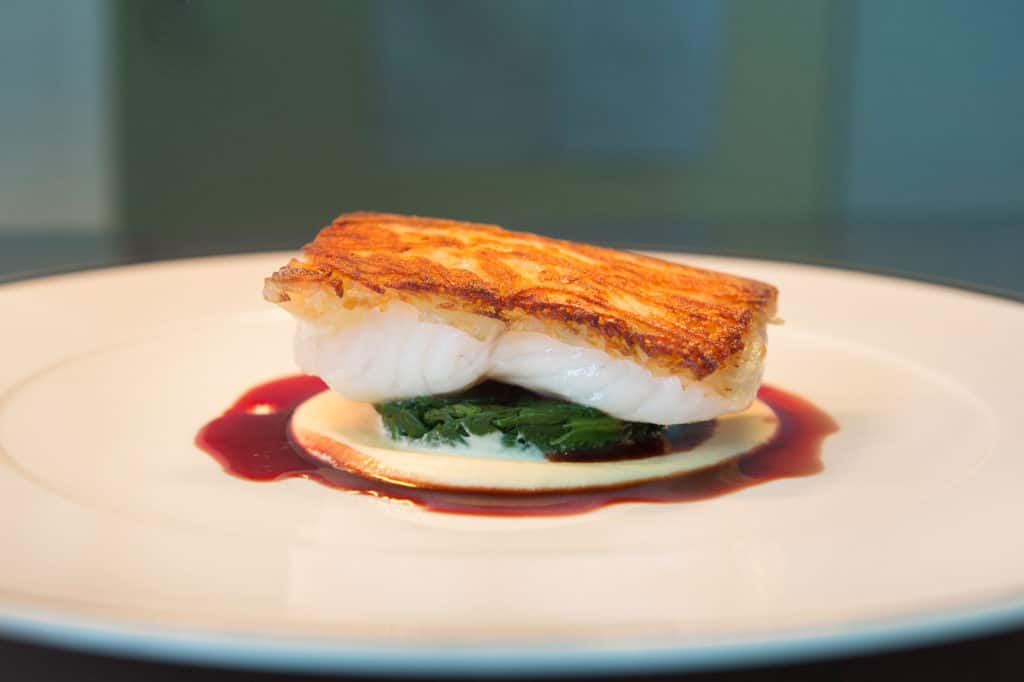 You will travel north with a stop off at the beautiful Culzean Castle before traveling North via Loch Lomond and the Trossachs National Park before finding the town of Dunblane and Cromlix House owned by famous Scottish tennis star Andy Murray. Situated in beautiful countryside, less than five miles from Dunblane, Cromlix House Hotel is set in 34 acres of secluded woodlands and garden, with an attractive trout loch.

This glorious 260ha estate was once the playground of David Kennedy, 10th Earl of Cassillis – a man who was keen to impress with his wealth and status. Opulent to the extreme, the park is planted with conifers and beech, sculpted around miles of sandy coastline dotted with caves, and finished off with a Swan Pond, an ice house, flamboyant formal gardens and fruit-filled glasshouses. The castle itself is perched on the Ayrshire cliffs, incorporating everything the earl could wish for in his country home. It was designed by Robert Adam in the late 18th century and is filled to the turrets with treasures that tell the stories of the people who lived here.

Travelling from Dunblane you will head west into the Loch Lomond and The Trossachs National Park until you reach it’s peak at Crainlarich which will lead you into the famous Glencoe, the gateway to the Highlands. This famous valley is one of the most scenic places in Scotland, Glencoe is remote and tranquil and has been used in many movie sets throughout history.

You will continue north through Glencoe to the town of Fort William before continuing until you reach Eilean Donan Castle.

One of the most iconic images of Scotland, Eilean Donan Castle is regarded as one of the most beautiful castles in the country. The castle lies on the “eilean” (island) of Donan, thus the castles name, the island itself lies in the centre of the merging point of three large sea lakes. Surrounded by rolling hills this fully restored 13th century castle is always worth a stop to explore or as a photo opportunity.

Leaving Eilean Donan you will make the short journey to Kyle of Lochalsh where you will cross the Skye Bridge onto the famous island and finally to Kinloch Lodge.

Kinloch Lodge is a special place. It is somewhere to escape the noise and speed of modern life. Somewhere to relax and recharge, where you can take things at your own pace.

Two luxury double rooms with a King bed and bathroom ensuite with walk-in shower and separate bath. These rooms have a front facing sea view overlooking the lawn to the Sound of Sleat.
Dinner, bed and breakfast.

The Isle of Skye is frequently, justly described as one of the most spectacular places on earth. Kinloch is in a particularly beautiful part of the island: down a long drive, at the foot of a mountain and at the head of Loch na Dal. Here you will find some of Scotland’s best food, roaring fires, whisky on tap and giant beds. It can be hard to leave. 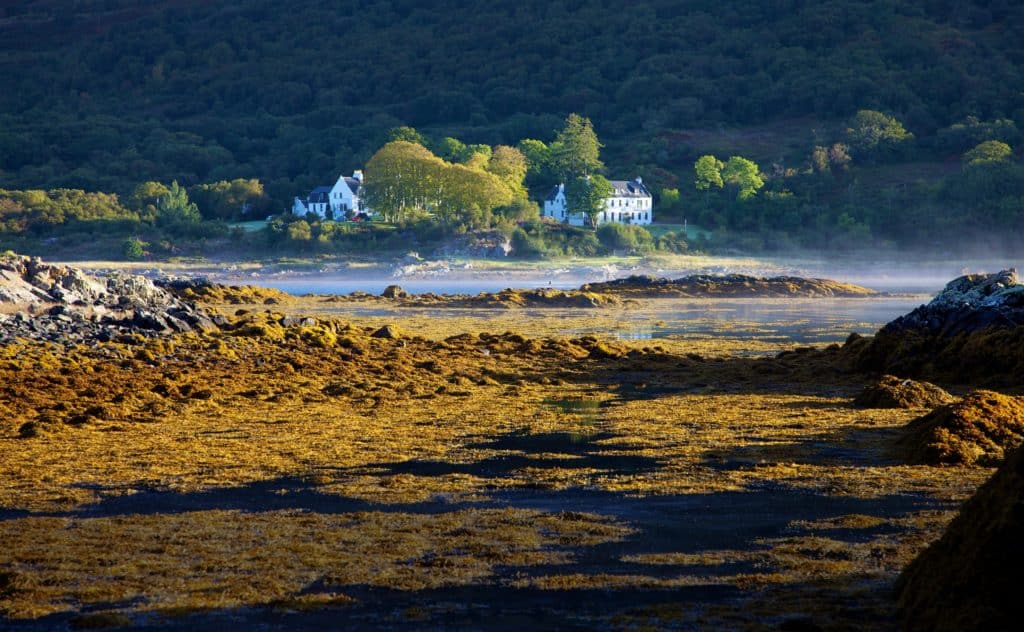 You will awake on day 7 where you will venture to South Uist for the evening.

You will travel to the town of Uig witnessing some spectacular scenery as you travel. You will reach Uig in time to take the 9.30am ferry crossing to Lochmaddy in North Uist in order to travel south from North Uist across to Benbecula and on to South Uist.

It is said the MacLellans of South Uist all hail from a common ancestor John More MacLellan who dates back to the 17th century and inhabited North Uist. This branch of the MacLellan Clan is said to have originally migrated from South Uist.

You will spend the evening in the basic Polochar Inn and have the chance to converse with locals as you enjoy a beverage at the bar.

Whilst here we have arranged for you to meet a knowledgable local historian, Tommy MacDonald, to learn more about the history of the Maclellan clan and their association with South Uist. 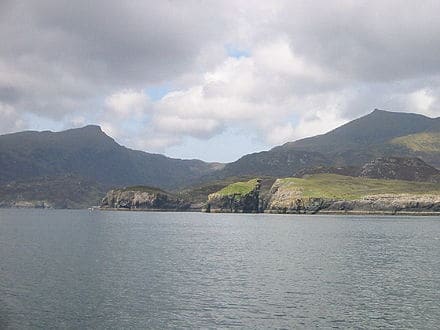 You will travel via 7am ferry from Lochboisdale to Mallaig where you will traverse the spectacular serpentine coastal roads along side turquoise blue waters and crisp white sandy beaches. There will be the chance to stop at The Glenfinnan Viaduct made famous by the Harry Potter movies before driving to Glencoe House via the town of Fort William.

You will spend the evening in Glencoe House, built by Lord Strathcona in 1896, sits majestically overlooking Glencoe, Scotland’s most famous Highland landscape. Glencoe House comprises fourteen generous private suites (from 75-148 sq. metres) and contains two distinctive concepts, both of which offer elegant but relaxed and sumptuous suites, with the space and privacy to really kick your shoes off and unwind. 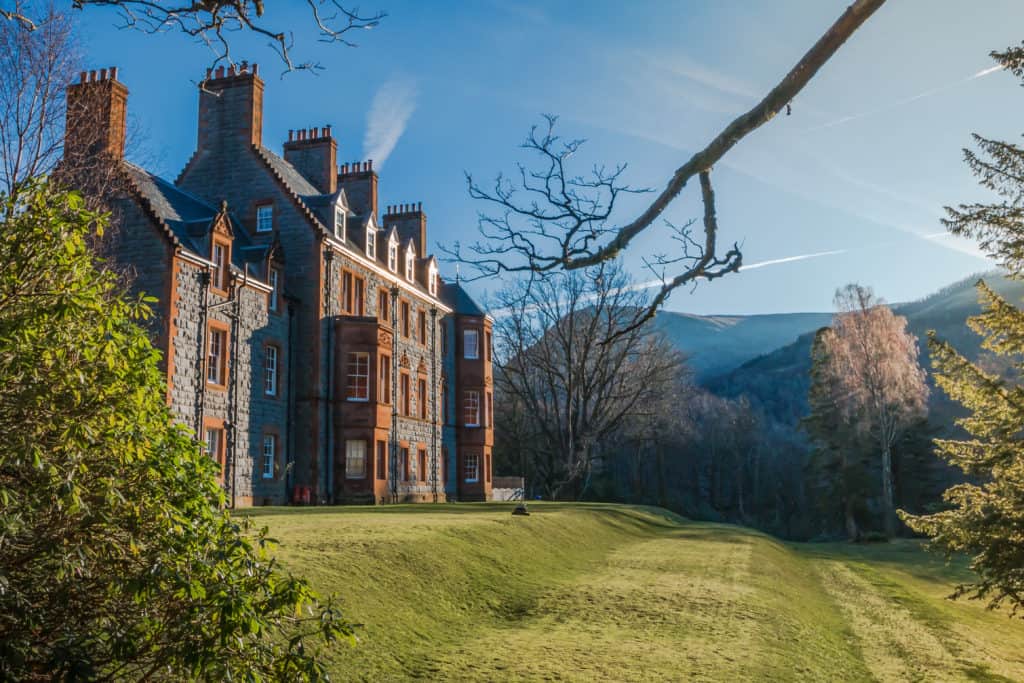 On day nine you will travel to the city of Glasgow where you will have the chance to have lunch in the city centre before departing for the airport where you will meet a member of the Lang Atholl Experience team who will collect your vehicle and bid you farewell. 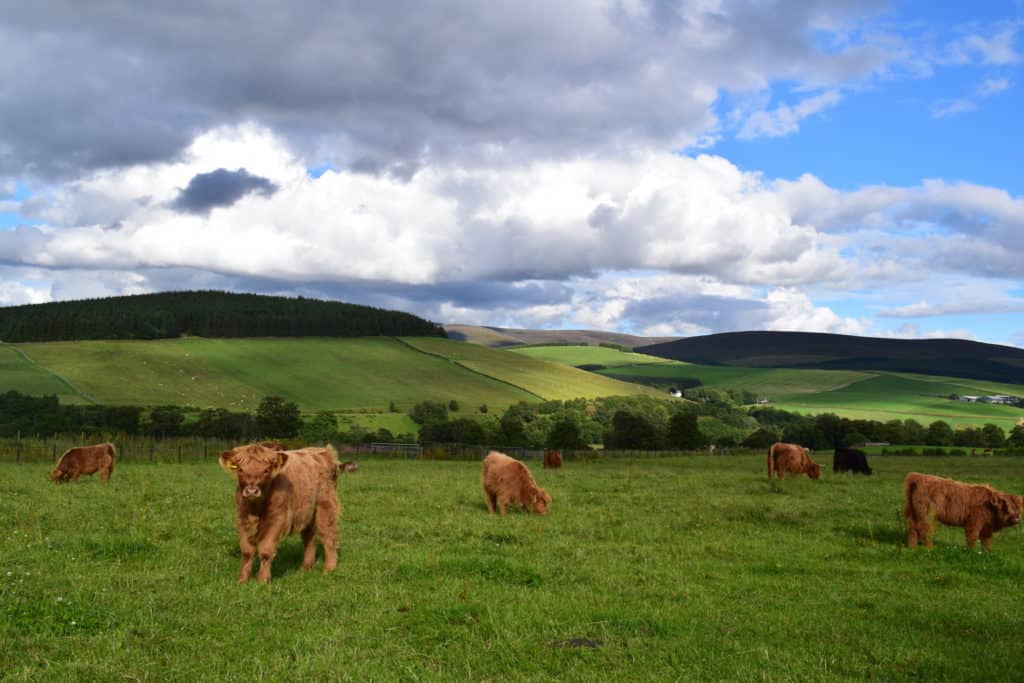